Halliday (1985: 307) treats intensive relationals as elaborating, possessives as extending and circumstantials as enhancing… .  This interpretation can be adopted here with two reservations.  First, descriptive intensive attributive clauses need to be distinguished from classifying ones:

The descriptive type will be treated as extending here, since they assign qualities to participants in the same way that Epithet°Thing structures do.  The classifying type relates subclasses to their superordinates and is better left as elaborating since its function is similar to that of Classifier°Thing structures in the nominal group.

Second, possessive clauses which have to do with part/whole relations rather than ownership will be treated as elaborating because of their taxonomic focus.  Their function is similar to that of the classifying intensives in that they assign parts, building up composition taxonomies for a given field.  In this respect they resemble the Pre-Deictic, Pre-Numerative and possessive Deictic structures discussed above.

[1] As the term 'descriptive' suggests, the expansion type here is elaboration, not extension — just as it is in the case of Epithet and Thing.  See previous critique here.

[2] Part/whole relations — meronymy — are a manifestation of extension, not elaboration.  Extension has three main subtypes: composition (meronymy), possession and association (Halliday & Matthiessen 1999: 146), and these are fractal types that are manifested at various scales and domains throughout the linguistic system.  To classify composition as elaboration is not only a misunderstanding of the concepts involved; it creates an inconsistency in the model that resonates through the entire system.
Posted by Dr CLÉiRIGh at 00:00:00 No comments:

It remains to consider relational clauses, which function to instantiate (Hasan 1985: 82) the relationships of elaboration, extension and enhancement just considered; with relational clauses the grammar works to positively construct the relationships involved rather than simply realising them.  Halliday (1985: 307) treats intensive relationals as elaborating, possessives as extending and circumstantials as enhancing:

[1] The sense in which relational clauses "instantiate" the three types of expansion is as instances of that potential. The theoretical relation between the meanings (elaboration, extension and enhancement) and the wordings (intensive, possessive and circumstantial relational clauses) is the stratal relation of realisation.

[2] The citation does not relate to the proposition.  Hasan (1985: 81) distinguishes general lexical cohesive devices from those that are 'specific to a single text', and terms the latter 'instantial'.

[4] To be clear, although this is a possessive identifying clause, the Process is intensive, and thus realises the expansion relation of elaboration, not extension.  The possessive relation is realised by the possessive nominal group.  See Halliday & Matthiessen (2004: 245-7).

[5] To be clear, although this is a circumstantial attributive clause, the Process is intensive, and thus realises the expansion relation of elaboration, not enhancement.  The circumstantial relation is realised by the preposition.  See Halliday & Matthiessen (2004: 240-1).
Posted by Dr CLÉiRIGh at 00:00:00 No comments:


The notion of peripherality is extended to nominal and verbal groups in Table 5.14.


[1] In this alternative model of nuclearity, the 'nucleus' is construed as non-nuclear — as peripheral to the 'centre'.  In combination with this, the terminology does not reflect a cline of values — 'centre' and 'nucleus' are synonyms, as are 'margin' and 'periphery'.

[2] As the table makes clear, this alternative model of nuclearity confuses experiential nuclearity with logical expansion type — construing elaboration at the centre, extension further out at the nucleus, and enhancement at the periphery.  See previous posts (since 10/10/15) for details on the misapplications of expansion types as represented in this table.

[3] In SFL theory, units on the rank scale — clauses, group/phrases, words, morphemes — form (logical) complexes, whereas elements of function structure, such as the Event of a verbal group, do not.

[4] This construes a 'Manner adverb' as an element of verbal group function structure.  See critique in previous post here.
Posted by Dr CLÉiRIGh at 00:00:00 No comments:

Matthiessen (1922) sums up the semantic continuity between participants and circumstances as outlined in Fig. 5.22, which also brings out their nuclearity with respect to the Process: 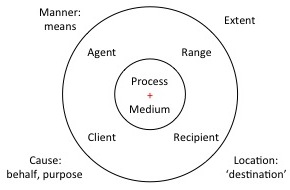 The elaboration, extension and enhancement analysis presented above provides an alternative perspective on peripherality.  Matthiessen's diagram can be amended in line with this perspective by treating Process°Range:process structures as more nuclear than Process°Medium ones.  Range:entities could be left as more peripheral than Mediums since like Agent and Beneficiaries they have both prepositional and non-prepositional realisations… .

[1] In the context of this discussion, the label 'Process + Medium' in Martin's representation of Matthiessen's diagram implies an extension relation between the two functions. In SFL theory, the relation between Process and Medium is construed as one of complementarity within the Nucleus (Halliday & Matthiessen 1999: 154).

[2] This "alternative perspective" has been shown in previous posts to be one that only arises through multi-dimensional misunderstandings of SFL theory.

[4] In SFL theory, the complementarity of Process and Medium forms the Nucleus to which other functions are related by expansion or projection — the latter being omitted from this alternative perspective. To construe Process°Range: process as 'more nuclear' than the Nucleus betrays a misunderstanding of nuclearity, as demonstrated in previous posts.

[5] A further inconsistency introduced here is the notion that structures are located on the cline of nuclearity. The cline orders participants and circumstances in terms of nuclearity.

[6] As explained in a previous post, the ±prepositional realisations are motivated by the textual metafunction and do not bear on the experiential dimension of nuclearity. Moreover, the perspective taken is that of formal not functional theory, namely categorising according to form rather than function.
Posted by Dr CLÉiRIGh at 00:00:00 No comments:

Classifying Expansion Type On The Basis Of Form

At clause rank, the TRANSITIVITY roles which have not been considered are Agent and Beneficiary (including Client, Recipient and Receiver).  These roles are intermediate between extensions and enhancements, and are accordingly realised both with and without prepositions in clause structure:

[1] No argument is provided as to why Agent and Beneficiary rôles are "intermediate between extensions and enhancements" — it is merely asserted as a fact.  In SFL theory, the expansion relation between the Nucleus and both the Agent and the Beneficiary is enhancement, not extension (Halliday & Matthiessen 1999: 175, 219), not least because

[2] The reason for the variation in participant realisation — as prepositional phrases or nominal groups — has nothing whatsoever to do with expansion type.  Halliday & Matthiessen (2004: 295-6):

… the choice of ‘plus or minus preposition’ with Agent, Beneficiary and Range … serves a textual function. … The principle is as follows. If a participant other than the Medium is in a place of prominence in the message, it tends to take a preposition (i.e. to be construed as ‘indirect’ participant); otherwise it does not. Prominence in the message means functioning either

(i) as marked Theme (i.e. Theme but not Subject) or

(ii) as ‘late news’ — that is, occurring after some other participant, or circumstance, that already follows the Process.

In other words, prominence comes from occurring either earlier or later than expected in the clause; and it is this that is being reinforced by the presence of the preposition. The preposition has become a signal of special status in the message.

This interpretation of the experiential grammar in terms of the general logico-semantic relations of elaboration, extension and enhancement is summarised in Table 5.13.

As this table is a summary of the preceding discussion, see previous posts for more detailed arguments.

[1] The relation between the Classifier parking and the Thing lot is enhancement, not elaboration.  It is a lot for the purpose of parking.

[2] To the extent that the preposition up construes direction, the relation between the verb shoot and the preposition within the phrasal verb is enhancement: location, not elaboration.

[3] Expansion relations obtain between the Nucleus (Process/Medium) and other participants and circumstances, not between the Process and Medium.

[4] The relation between the Epithet new and the Thing car is elaboration, not extension.  The Epithet provides further detail about the Thing.

[5] The expansion relation obtains between the Nucleus and the circumstance of Manner: quality, not  within a verbal group between Event and "Quality".
Posted by Dr CLÉiRIGh at 00:00:00 No comments:

The relation between the Thing and Qualifier is projection: matter, not enhancing expansion.
Posted by Dr CLÉiRIGh at 00:00:00 No comments:

Reclassifying Function According To Form

See yesterday's post for a theoretical explanation for the different realisations of Manner: as adverbial group or prepositional phrase.

[3] This continues the earlier confusion of markedness and congruence.  See previous clarification  (30/4/15) here.
Posted by Dr CLÉiRIGh at 00:00:00 No comments:

Relocating A Subset Of Manner Circumstances To The Verbal Group

Adverbial realisations of manner are probably better treated as enhancements of events (at verbal group rank) rather than of processes (clause rank).  This brings out the semantic continuity at group rank between modifying nouns and modifying verbs:

As might be expected, it creates a host of theoretical inconsistencies, as well as making the theory less parsimonious.  Two examples:

Halliday & Matthiessen (2004: 267) explain the reason for the different realisations of Manner as follows:

Manner comprises four subcategories: Means, Quality, Comparison, Degree … Means is close to the participant rôle of Agent and Comparison is like a participant in a clause with the same type of process, whereas Quality and Degree are like features of the process itself. These differences in status are reflected in realisational tendencies: Means and Comparison tend to be realised by prepositional phrases, whereas Quality and [Degree] tend to be realised by adverbial groups.

With verbal groups, extension combines events.  Halliday (1985: 255-69) categorises a wide variety of verbal group complexes with respect to both expansion and projection.  He reserves the category of extension for conation…

For purposes of lexical cohesion analysis however, all verbal group complexes will be treated as involving extension here, in order to bring out proportionalities of the following kind:

[2] The logical grammatical structure of verbal group complexes is not a factor in analysing cohesive (textual nonstructural) relations between lexical items.

[4] Any proportionalities that depend on a falsehood are themselves false.  Moreover, no argument is provided for the value of cross-categorising types of expansion with phrasal verbs, verbal group complexes, and clause fragments.

[5] As related by enhancement, these examples are each Process and Manner circumstance within a clause realising a figure.

Similarly, whereas Classifiers elaborate the Thing, Epithets add qualities.  These may be of an experiential or attitudinal kind:

[1] In every case, the expansion relation between the Epithet and Thing is elaboration, not extension.  This is demonstrated by the agnate relational clauses, all of which are intensive (elaborating), not possessive (extending): the car is red/ugly, the lunch is big, the ball is round etc.

[2] This is a Classifier, not an Epithet, as shown by the fact that, unlike Epithets, it can't be intensified as a very speeding bullet.
Posted by Dr CLÉiRIGh at 00:00:00 No comments: