A Misleading Analysis Of "Instantial Reference"

Finally instantial reference needs to be considered. Where the ideational resources of the grammar (identifying clauses or nominal group apposition) are used to identify participants, the dependency line connecting them in reference chains can be assigned the valence INST.  Instantial reference often has the effect of conjoining chains, as in [3:84] below.

The boy was looking for his frog
he eventually found one
but he didn't realise
it was his frog. 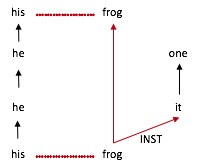 All lexical cohesive devices discussed above are general in nature.  For example, the relation of synonymy between lady and woman is a general fact of English.  There are cohesive devices that are entirely specific to a single text, for example, those of INSTANTIAL SEMBLANCE as in all my pleasures are like yesterdays (Hasan 1984).

To be clear, all co-reference, personal (he, her, its etc.) and demonstrative (the, this, those etc.), is necessarily instantial.

[2] To be clear, the reference in this text constructed by Martin is as follows:
There is no "conjoining" of reference chains; but see [3] below.

[3] There are three serious problems with Martin's analysis.

Firstly, the analysis violates Martin's own model, which treats reference as a (structural) relation between nominal groups realising participants. On this basis, the first and last items in the chain should be his frog, not his.  However, such an analysis would expose a serious flaw in the model, since his frog and he are different participants.

Secondly, the analysis misrepresents a relation of lexical cohesion (the repetition of frog) as an instance of reference.  This can be seen as an attempt to hide the flaw in the model, identified in the previous paragraph.

Redundancy Phoricity: A System With No Structural Realisation

Note that redundancy phoricity is not taken as contributing to the structure of reference chains, since it is not concerned with presuming the identity of participants, but simply with presuming some aspect of their experiential meaning.  Substitution and ellipsis at group rank is thus more appropriately treated as an aspect of lexical cohesion…

[1] To be clear, redundancy phoricity is Martin's rebranding of Halliday & Hasan's (1976) cohesive system of substitution and ellipsis, misunderstood as a type of reference, and relocated from lexicogrammar to Martin's discourse semantics stratum.

[2] To be clear, here Martin proposes a system (paradigmatic axis) that has no structural realisation (syntagmatic axis).

[3] This is misleading, because it is manifestly untrue, since the substitution and ellipsis is of wording, not experiential meaning (Halliday & Matthiessen 2014: 635-6).  Moreover, the elements subject to substitution and ellipsis are identified in terms of the interpersonal metafunction (ibid.).  So, in terms of Martin's discourse semantics as 'meaning beyond the clause', this is neither meaning nor beyond the clause.

[1] To be clear, relevance phoricity is Martin's rebranding of Halliday & Hasan's (1976) comparative reference, misunderstood and relocated from lexicogrammar to Martin's discourse semantics stratum.

[2] To be clear, reminding phoricity is Martin's rebranding of Halliday & Hasan's (1976) demonstrative and personal reference, misunderstood and relocated from lexicogrammar to Martin's discourse semantics stratum.

[3] To be clear, Martin's bridging is a confusion of Halliday & Hasan's (1976) lexicogrammatical systems of reference and lexical cohesion, proposed as a discourse semantic system.
Posted by Dr CLÉiRIGh at 05:00:00 No comments:

Cataphoric reference almost always presumes text, rather than participants; this can be entered into the participant chain where room is available, or simply indexed to the relevant portion of the text being analysed.

On the one hand, the notion of a participant chain is invalidated by any 'links' in that chain that are not participants.

On the other hand, given that participants are part of the text, the distinction between 'text' and 'participant' discloses that Martin conceives of participants as meanings outside the text (Frege's Bedeutung or 'referent') rather than as meanings in the semantic sense (Frege's Sinn or 'sense').  This is inconsistent with the epistemological foundation of SFL theory, whereby all meaning is conceived of as immanent, within semiotic systems, rather than transcendent of them.
Posted by Dr CLÉiRIGh at 04:00:00 No comments:

Identifying 'The Cat' With 'Her Dinner'

Where chains are initiated exophorically or homophorically this raises the question of how to analyse subsequent mentions of the same participant.  The most economical strategy is to code the first member of the chain as exophoric or homophoric and subsequent realisations as anaphoric.  It then follows from the way the chain initiating item is coded that the rest of the realisations in the chain are interpretable as both anaphoric and exophoric or homophoric as well.  This strategy is illustrated for [3:80] and [3:81] below.


Pass me that one, will you?
— Here, take it.
You've been drooling over it for more than an hour.


[3] This demonstrates the absurdity that results from mistaking nominal groups for reference items.  Here Martin's model identifies the participant her dinner with the participant the cat.  In SFL theory, it is the reference item her that refers anaphorically to the cat.
Posted by Dr CLÉiRIGh at 03:00:00 No comments:

As noted in 3.1 above, first mentions of participants in discourse are commonly phoric.  Exophoric and homophoric first mention is quite common; parts and possessions are typically introduced via possessive Deictics; and bridging is favoured where the identity of a participant can be indirectly presumed.  As DuBois (1980:254) comments, "the definite article is the unmarked member of the pair.  When consciousness is not focussed on the task of introducing characters, it is the unmarked the which is uttered, whether or not the initial mention is in fact identifiable."  It may be that Dubois' data has been biassed in this way by its re-telling context — that of speakers recounting the plot of a short film they have just seen.  But it's certainly true that the principle of introducing participants phorically where possible is a very general one across a wide range of English texts.

[2] It will be seen that, in Martin's model, where the identification is between participants, possessive Deictics wrongly identify possessors with possessions, as demonstrated by:


Jim gets a lot of things wrong, and so do his students.

Here Jim and his students, on Martin's model, are necessarily identified as the same participant. This demonstrates most clearly the absurd consequences that arise from mistaking nominal groups for reference items.

[4] On the one hand, this deliberately misrepresents Du Bois (1980: 254), whose view on the relative frequencies of definite and indefinite articles in this regard derives from a corpus of one million words:

On the other hand, it should be pointed out that Martin adopted the same strategy as Du Bois (1980), in as much as the data for this chapter — text [3:88] (p147) — is a child's retelling of a published story.  A significant difference, however, is that, in almost every case in the chapter's exposition, Martin has ignored this text and instead used his own constructed examples involving characters from that text.
Posted by Dr CLÉiRIGh at 02:00:00 No comments:

Again, the dependency relations in the chain are worked out in accordance with the principle that anaphoric items are related backwards once to the item last realising or presuming the information they presume; thus [in 3:79] the boy in the fifth clause and the dog in the sixth are shown to presume they in the fourth.


The boy and the dog woke up
and saw that the frog was missing.
with the boy leading the way [sic]

They headed off for the woods,
with the boy leading the way
and the dog following behind him.

At its simplest, a reference chain consists of two items, one presuming, one presumed.  For display purposes, the nominal group realising a given participant in a text will be used to name that realisation of the participant in the reference chain. […] For longer texts, these chains can simply be extended, with presuming items shown to be as well presumed; these then form the systemic equivalent of the "participant lines" in the Hartford stratificationalists' reticula […].  The basic descriptive strategy underlying chains formed in this way is to take each phoric item back once to the item which last realised or presumed the information that needs to be recovered.

[1] This notion of reference chains, as linked instantial participants sharing the same identity, is not consistent with what the model is purported to be: 'reference as semantic choice'.  This is because, in SFL, reference is the grammatical system that is the resource for referring (personal and demonstrative co-reference and general and specific comparative reference).  In order to be a semantics of reference in SFL, the meanings realised by the grammatical system of reference need to be modelled, specifying how such semantic choices are realised at the level of lexicogrammar.

[2] Reference chains as linked instantial participants sharing the same identity, are not structures that realise a system of referring.  Moreover, reference chains are not structures that realise any of the systems provided in this chapter (pp 102, 105, 106, 110, 112, 114, 118, 120, 124, 126), and, naturally, none of these systems provide realisation statements specifying how their features are realised as structures.
Posted by Dr CLÉiRIGh at 00:00:00 No comments: