This interaction of lexical strings with Theme is itself associated with [6:34]'s internal conjunctive structure.  The text justifies the claim that the English constitution is the child of wisdom and chance with two examples ([6:34e-f] and [6:34g-q]).  The Themes in [6:34e+f] and in [6:34g+i] scaffold this rhetorical structure.  This three-way pattern of interaction (conjunctive relations, lexical strings and Theme) is outlined in Fig. 6.8. 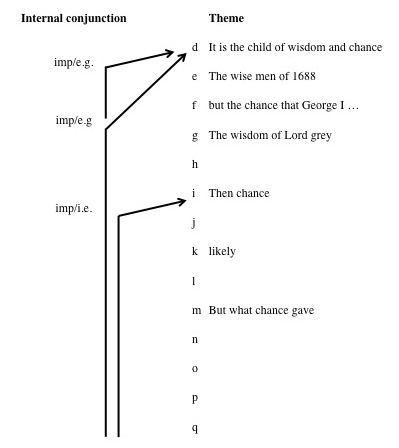 Figure 6.8. Interaction of internal conjunction, lexical strings and Theme in [6:34]


[1] Contrary to the analysis depicted in Figure 6.8, two of the examples presented as Theme, [d] and [k], do not constitute the Theme of their respective clauses.  In the case of [d], this is acknowledged in the text of the following page, but its inclusion in the diagram is a deliberate fudge in order to ease in the notion of hyper-Theme (see the following posts).

[2] There are no internal conjunctive relations in this text — implicit or otherwise.  As previously explained, in the case of temporal conjunction in textual cohesion, the distinction between internal and external relations is the distinction between the temporal unfolding of the discourse (interpersonal time) and the temporal sequence of the processes referred to (experiential time), respectively (Halliday & Matthiessen 2004: 545).  Here is the complete text for verification:

The English Constitution — that indescribable entity — is a living thing, growing with the growth of men, and assuming ever-varying forms in accordance with the subtle and complex laws of human character.  It is the child of wisdom and chance.  The wise men of 1688 moulded it into the shape we know, but the chance that George I could not speak English gave it one of its essential peculiarities — the system of a cabinet independent of the crown and subordinate to the Prime Minister.  The wisdom of Lord Grey saved it from petrification, and set it upon the path of democracy.  Then chance intervened once more.  A female sovereign happened to marry an able and pertinacious man, and it seemed likely that an element which had been quiescent within it for years — the element of irresponsible administrative power — was about to become its predominant characteristic and change completely the direction of its growth.  But what chance gave chance took away.  The Consort perished in his prime, and the English Constitution, … , continued its mysterious life dropping the dead limb with hardly a tremor as if he had never been.

[3] This confuses metafunctions.  'Justifying a claim' describes the text in terms of its interpersonal enactments (and ideational construals), rather than in terms of its textual highlighting (e.g Theme) and textual transitions (e.g. cohesive conjunction).

[4] What the author does textually is to take the New information in [d] wisdom and chance and highlight each of them in turn by giving thematic status, thereby making them the (Given) point of departure for the introduction of further New information.  In SFL theory, it is this, combined with the non-structural textual resources — those of lexical and grammatical cohesion — that create the texture of this text.
Posted by Dr CLÉiRIGh at 00:00:00 No comments: