On Possessive "Pronouns" In Deictic Position

Possessive pronouns in Deictic position, function like embedded nominal groups to realise a participant different from that coded through the Numerative ^ Epithet ^ Classifier ^ Thing structure.  Like embedded groups, these possessive pronouns function in place of the deixis that would otherwise be associated with the group.  This raises the problem of how to interpret the phoricity of the participant realised through the Thing in possessive groups like his frog, John's friend and so on.  Halliday and Hasan (1976: 70) and Halliday (1985: 160) treat possessive pronouns as a type of specific deixis, alongside the, this, that, these and those.

This seems to imply that the identity of the frog and the friend in his frog and John's friend is being coded as recoverable, alongside the identity of his and John.  His frog in other words does not mean 'a frog of his' nor does John's friend mean 'a friend of John's'; where the latter meanings are intended then the expressions one of his frogs or one of John's friends would have to occur.  Du Bois (1980:243) concurs, arguing that "his is similar to the in that it demands (presupposes) identifiability, but different in that it supplies some extra information that may help make the identification possible".

[1] This confuses ideational denotation ('realise a participant') with the interpersonal function (deixis) with the textual function (reference) of possessive adjectives (confused with pronouns).  In SFL theory, the entire structure of a (ranking) nominal group realises one participant.

[2] To be clear, possessive adjectives function as the Deictic of the nominal group.  Deictics aren't associated with nominal groups, they are part of its structure.

[3] On the one hand, "participant realised through the Thing" confuses clause participant with nominal group Thing — even in terms of Martin's definition of participant as nominal group functioning as Medium or Agent.  On the other hand, the notion of a Thing being phoric confuses ideational denotation with textual reference.

[4] This non-sequitur demonstrates the degree to which Martin fails to understand the model of reference (and deixis) in Halliday & Hasan (1976) and Halliday (1985).  The nominal groups his frog and John's friend include only one potential reference item, his, whose identity is signalled as recoverable elsewhere.  Neither frog, nor John's, nor friend functions as a reference item signalling identifiability; on the contrary, each provides an identity.  The confusion again arises from misinterpreting textual reference as ideational denotation.

[5] This demonstrates the absurdity that arises from these misunderstandings SFL theory.  In these instances, the same meaning is realised through different wordings (Deictic vs Qualifier). 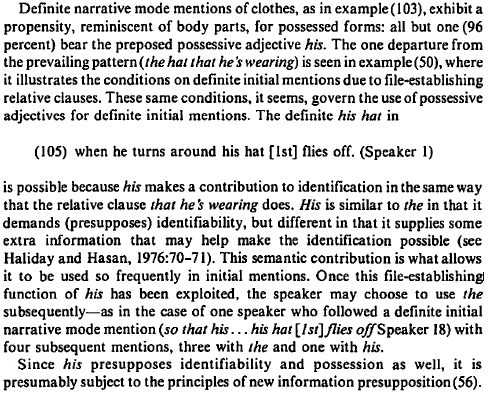 The "extra information" Du Bois refers to is, as Halliday & Hasan (1976: 71) explain, the person signalled by the possessive Deictic, in comparison with the definite article, which has no content.
Posted by Dr CLÉiRIGh at 12:00:00