Comparative adverbs realise relevance phoricity; they function as Circumstances [sic] of Extent and Manner in clause structure and presume events.  Both relevant events and supersets of events are presumed.  The network of oppositions is outlined in Fig. 3.16; typical realisations are shown in the network and illustrated in [3:94] through [3:99].

You had to set a record to place;
Ben ran fast enough.

You had to run a record time to win;
Carl ran too slow.

[2] This mistakes circumstances of Extent and Manner (clause rank experiential functions) for comparative reference items (a non-structural textual functions).  Moreover, it will be seen below that none of the examples provided are instances of Extent.

To be clear, the grammatical domains of comparative adverbs that function as reference items are the nominal group and the adverbial group.  Halliday & Matthiessen (2014: 633): 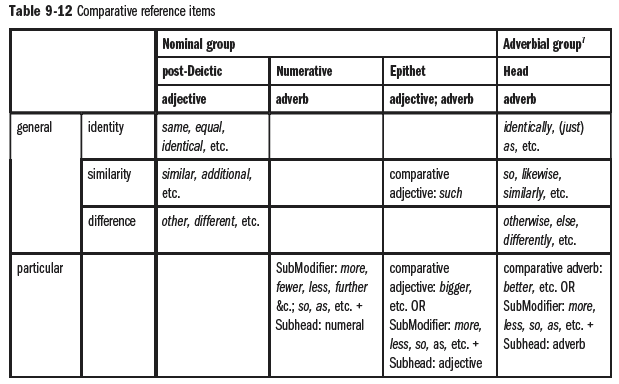 [3] The notion of "presuming events" — Martin is not referring here to the verbal group function 'Event' — demonstrates that Martin has little understanding of the principles underlying comparative reference.  Halliday & Matthiessen (2014: ) explain:

Whereas personals and demonstratives, when used anaphorically, set up a relation of co-reference, whereby the same entity is referred to over again, comparatives set up a relation of contrast. In comparative reference, the reference item still signals ‘you know which’; not because the same entity is being referred to over again but rather because there is a frame of reference – something by reference to which what I am now talking about is the same or different, like or unlike, equal or unequal, more or less.


[4] In addition to being devised on the basis of the above-mentioned theoretical misunderstandings, a number of further problems with the network in Figure 3.16 Phoric circumstances of extent and manner can be identified.

[6] To be clear, none of these is an instance of Extent.  The experiential function of farther, farthest and fast enough is Manner.

[7] To be clear, superlatives (farthest, fastest) do not function as comparative reference items.

[8] Here Martin misinterprets clause complexes as single clauses, and claims that the respective circumstances (fast enough, too slow) "presume" the respective purpose clauses (to place, to win).  However, in terms of cohesion, these are both instances of ellipsis, as restoring the elided items makes plain: